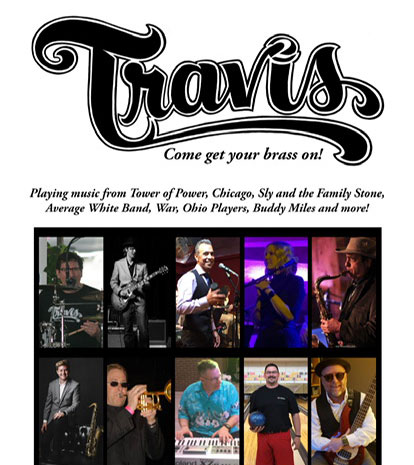 TRAVIS Band Bio and Development
In the summer of 1971 Albert “Red” Travis, Instrumental Music Director at Omaha South High School, had the idea of forming a brass rock band that could perform covers of some of the most contemporary music of the time. Artists like Chicago, Blood Sweat and Tears, Tower of Power, Earth Wind and Fire, Cold Blood, Wayne Cochran, Chase and many more.
His idea stemmed from the current OPS curriculum of the times in modular scheduling. This type of scheduling allowed students numerous free “mods”, during the course of the school day. The format provided students to spend their free time in classes that they enjoyed and truly had a passion for. Hence, students that had a passion for music spent the majority of their free mods in the band room. Mr Travis had noticed that many of his students had developed far and beyond what the average instrumental music student would have, primarily based on the additional time they were spending developing their prowess on their particular instruments.
Mr Travis had the perfect training grounds for testing his idea. He utilized his Stage/Lab band, the equivalent of the Big Bands of previous generations. The difference was, that instead of focusing the majority of the repertoire on the classics of Duke Ellington, Count Basie, Stan Kenton and others, he arranged and scored the charts of the modern contemporary artists aforementioned. The proof of his successful idea was affirmed by the recognition of the OSHS Stage band in state wide competitions from 1970 through 74. It became one of the most decorated Stage Band projects in Nebraska High School History.
Essentially, the Stage Band became the recruiting pool and audition process for the Brass Rock Band Travis. Many of the original members came from classes dating from 1969 through 1980.
TRAVIS Generation 1, consisted of 9 members, Bass, Guitar, Drums, 4 trumpets, tenor sax, and Front person and Vocalist. Mr Travis was undecided as to who would front the band. He held auditions with very talented males and females and when consulting with the bands agent Bob Belitz and some of the senior members, it was determined that a female would front the group.
TRAVIS assembled approximately 90 minutes of music and was entered into the 1972 Omaha Battle of the Bands, an open air event in downtown Omaha featuring some of the most popular area bands of the era.This was Travis’s first ever performance and its inaugural opening as a new Omaha area band. At the end of the day,the public voted Travis as the winner of the competition and thus began a 10 year history in the Omaha music scene.